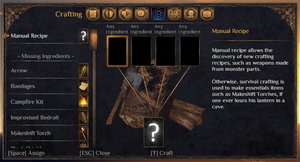 Crafting is a major gameplay mechanic in Outward which allows the player to create items ranging from Equipment to Food, Drinks, Imbues and many other items.

To craft items, the player can either select a known recipe, or manually craft a new one through trial and error or by knowing the recipe in advance.

The Survival Crafting menu is accessible at any time, and requires no station to craft items. For Cooking and Alchemy, the player will need the required station to see their recipes or attempt any crafting.

A Recipe refers to the knowledge of how to craft an item (ie. which ingredients it has, and which station). Once the player crafts the recipe the first time, it will be learned and added to the list of known recipes, which are displayed in the relevant Crafting menu. Certain items may have more than one recipe.

There are currently 286 recipes defined on the Outward Wiki.

Recipe scrolls can be found in the world or bought from vendors. Reading a recipe scroll for an item gives the player the recipe. However, this is not necessary — a player can simply place the correct items in the Manual Recipe section to achieve the same result, as well as unlocking the recipe for future crafting.

Not all items have an associated scroll. In this case, the item recipe can only be discovered through trial and error, or by knowing the recipe in advance.