Dark Ziggurat is a large marked dungeon on the west coast of Hallowed Marsh. It is the creation and fortress of the Plague Doctor, a powerful Lich.

The towering structure resembles a pyramid, and contains a complex system of pipes which channel the Corruption from the Marsh directly to the Plague Doctor himself, empowering him.

There are three entrances to Dark Ziggurat. The top one is a dead end until the player pulls the levers in the other 2 entrances. 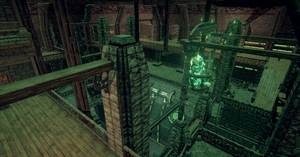 The interior of the Ziggurat is a large, complex dungeon with multiple levels and blocked pathways. The most notable loot includes a Tsar Stone, Ornate Chest, as well as the rewards from defeating the Plague Doctor.

The top entrance is now accessible, as well as the path across the middle between the two sides.

After unlocking the top entrance, the player can take the elevator to the bottom of the dungeon, where the Plague Doctor awaits. He rewards some of the most powerful equipment, the Tsar Weaponry.

Locked Room:
There is a locked room on the left side of the dungeon, near the ornate golden cage. It contains:

In order to access it, the player must first unlock the elevator at the top entrance (described above). Once this is done, there is a secret platform only accessible while traveling up or down the elevator, to the north. On this platform there are two levers - the closest one controls the elevator, and the far one unlocks the locked room. After you pull the far lever, head back to the ornate golden cage on the left side of the dungeon, the path to the Ornate Chest is now open. 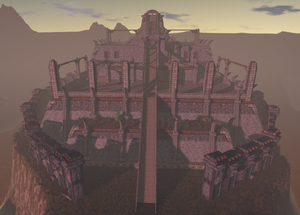 Aerial view of the Exterior

The exterior area of the Ziggurat is guarded by 3 Blade Dancers, and also contains a few gatherables.