Outward has 3 types of Skills:

Players can also receive skills as a reward for completing Quests. 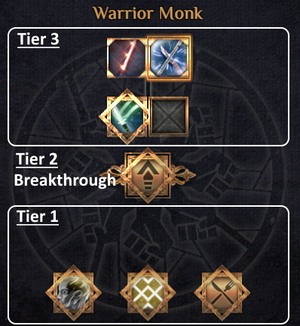 Example 1: of tier 3 skills locking out

When training at a Teacher, you are presented with a menu similar to Warrior Monk example shown.

* skills which are on the same row, ie. the top two rows in the Warrior Monk example

Trainers can be found all over Aurai, usually in towns. They offer skills for 50

, or as a reward for successfully negotiating quests or dialogue.